Shortly after midnight Saturday, Alaska had a 7.1 earthquake on the Kenai Peninsula; Home base for PTH Ministries. We just concluded the first PTH Conference of 2016 in Georgia and declared God’s Word Hebrews 12:25-29, “See to it that you do not refuse Him who speaks. If they did not escape when they refused Him who warned them on earth, how much less will we, if we turn away from Him who warns us from heaven?  At that time His voice shook the earth, but now He has promised, ‘Once more I will shake not only the earth but also the heavens.’   The words “once more” indicate the removing of what can be shaken—that is, created things—so that what cannot be shaken may remain.”

Could it be, He responded in the natural for what was declared in the Spirit?  The scriptures are full of declarations; declarations by the Lord and His servants alike.      The scripture also say we are to speak the very words of God, serve in His strength, and to Him be the glory and power (1 Peter 4:11).  Thus, if He decides to do some “shaking” we shouldn’t be surprised!  After all, He is God and He can answer anyway He chooses.  He desires to respond (in His time), we just only need to believe. 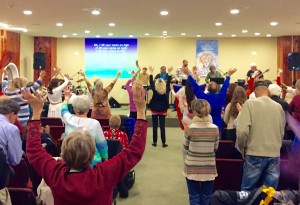 Since Sept.13, 2015 (Jewish New Year of 2016), many have sensed … “It’s Time!  For some, it will be new ground to plow, for some it will be new planting, for some it will be watering, for some it will be harvesting.  Yet, most importantly, it will be the start of filling storehouses.  When I inquired of the Lord …storehouses???  He answered,  “With souls;  7 years of plenty, fill your storehouse with souls.”  Render to the lost with the favor of God!  I believe it is time!  7 years of plenty have been ACTIVATED …” That which will be shaken will be shaken, and that which stands firm shall not move…  We shall be like the “PEG” in God’s house (Ezra 9:8-9); Firmly established in Him so that when the “shaking” comes, we are a fixed peg!

2016 is about God’s Love.  If we claim and declare this word of redemptive love over our lives we will be established as pegs in a sure place – fixed in the “Cornerstone, Jesus Christ;”  And declaring the “7 Years of Plenty” has started for those who have ears to hear, and believe.

So be encouraged!  Clothe yourselves with His favor, go and fill the “store house” with souls.  Be clothed with hope, righteous, and boldness, go and preach His “saving grace” and we will see and realize the fruition ” 7 years of plenty,” and a small measure of revival, as it says in Ezra, chapter 9:8-9.  Be strong and courageous!  OUR VICTORY IS CLOSE at hand …. Amen!!!

To all, those who did an amazing job serving Him at the conference, and those who did an amazing job lifting the PTH conference in prayer, I say this to you:  “Well done good and faithful servants!  May God Bless you and all those you love Every day, may you be armored, and be bold and courageous, walking in His promises as He is a shield before you … And may you always claim He is your rear Guard!!!”

Amid the shaking, go in His peace, His joy, which is our strength and measure of revival, by His Grace!!!

7.1 earthquake is a sign!  In all things, we give thanks!

Love you all!!!
Nancy